Live coverage and reaction to the interest rate rise 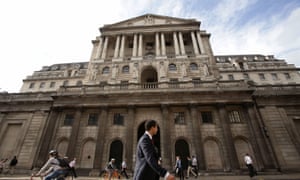 Exterior of the Bank of England Photograph: Yui Mok/PA

The Bank of England has announced the first increase in interest rates for a decade in an attempt to protect British households from the spiralling cost of living since the Brexit vote.

Threadneedle Street increased the cost of borrowing from 0.25% to 0.5% in awidely expected move to reverse the emergency action it took in the wake of the EU referendum, when it cut rates to avert a recession. The Bank said any future increases would be gradual and limited, but that it stood ready to respond to changes in the economic outlook.

Worrying signs for the British economy remain, but the Bank said it needed to keep inflation in check by raising higher interest rates, which it said it could hit 1% within the next three years to prevent the cost of goods bought in the UK from spiralling further.

What is the impact of an interest rate rise?

The members of the Bank’s monetary policy committee, including the governor, Mark Carney, voted to increase the cost of borrowing by seven to two. Deputy governors Dave Ramsden and Jon Cunliffe voted to keep it on hold.

The rise comes after the consumer price index (CPI) measure of inflation hit 3% in September and is expected to rise further, driven by the pound’s fall since the EU referendum. The Bank is mandated to target CPI at 2% to prevent the economy from overheating.

Raising interest rates will support the value of the pound, but it also raises borrowing costs for consumers and businesses through increased payments on mortgages and loans. That could curtail consumer spending and make it harder for businesses to borrow to invest, which in turn could clip the rate of economic growth just as Britain requires a shot in the arm during the Brexit process.

The MPC noted that business investment is being affected by uncertainties over the country’s withdrawal from the EU. The Bank predicated its forecasts on a smooth adjustment to a new trading relationship, meaning that a hard, disruptive Brexit could throw its plans off course.

Drawing the unprecedented period of low interest rates put in place during the financial crisis to a close means as many as 8 million Britons will experience a rate rise for the first time in their adult lives, according to analysts at the broker Hargreaves Lansdown. The last time the Bank increased rates was in July 2007, when it pushed the cost of borrowing to 5.75% months before cutting it during the onset of the crash.

The rise should, however, help to curtail rapid growth in consumer credit, with the total value of credit card debt, personal loans and car finance increasing at almost five times the rate of growth in earnings. The increase, to levels unseen since before the financial crisis, had raised alarm bells at the Bank in recent months.

Curtailing consumers’ access to cheap money may help avert a future financial crisis driven by people getting into trouble over debts they are unable to afford to repay, but it will also remove some of the money used for spending in the economy.

Threadneedle Street had been warned against increasing interest rates as storm clouds gather because of rising inflation, weak wage growth and uncertainty over Brexit. High street sales are falling at their fastest rate since the height of the recession as households put the brakes on spending in response to higher prices and sluggish earnings growth.

Analysis What the interest rate rise will mean for you

Ramsden and Cunliffe refused to support the rate rise because they felt there was insufficient evidence so far that wages were rising, which would be another factor behind rising prices should it emerge. The MPC’s main view is that wages should hit a growth rate of 3% in a year’s time – which is above current figure – because of low unemployment levels.

Despite historically weak levels of business investment, the Bank said further growth should come as firms benefit from the weakness in sterling and the global economy picks up pace, providing potential export opportunities for British firms. A higher contribution to GDP growth from exporters could help to offset weaker consumer spending.

That Brexit rcould derail the economy remains a major concern. The Bank found “uncertainties associated with Brexit were weighing on domestic activity, which had slowed even as global growth had risen significantly”.

The vote to leave the EU has constrained the speed at which the UK can grow before prices begin to spiral, according to the Bank, which said that the growth potential of the economy has been clipped below the levels it was able to achieve in previous years. The UK recorded a growth rate of 0.4% in the three months to September, much lower than the US and eurozone during the same period.

The MPC said: “Brexit-related constraints on investment and labour supply appear to be reinforcing the marked slowdown that has been increasingly evident in recent years in the rate at which the economy can grow without generating inflationary pressures.”

We are members of the following redress scheme: Property Redress Scheme